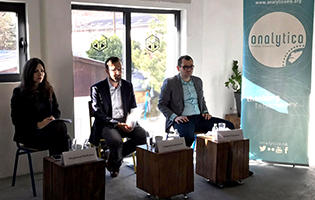 On 13 December 2016 Analytica organized an event to promote the findings of the report "Assessment of Police Integrity in Macedonia" in Public Room, Skopje. The report looks into certain aspects of police integrity such as: external oversight, internal accountability, human resource management, financial management and criminal prosecution.

The authors of the report Magdalena Lembovska and Filip Stojkovski presented the findings and the policy recommendations to the audience.

The presentation started with outlining the main challenges in ensuring external oversight of the Police by the Parliament and the Ombudsman. Based on the track record of the work of the Parliament and especially the work of the parliamentary Committee on Security and Defense, Magdalena Lembovska concluded that the Parliament provides only basic oversight and control of the police. The main focus is put on reviewing legislation, while existing oversight mechanisms remain underused. The Ombudsman, on the other side, faces obstructions from the institutions in fulfilling his mandate and lack of cooperation with the Ministry of Interior and the Public Prosecution. When it comes to internal accountability, there have been some positive developments in terms of structural changes within the Department for internal control, criminal investigations and professional standards. However, the number of decisions taken in favour of citizens in the cases of excessive use of force remains very low, which undermines public trust in this body. Furthermore, Ms Lembovska discussed the role of the judiciary, advocating for urgent reforms in the area, as the research established that the judiciary is one of the weakest links in building police integrity.

Next, Filip Stojkovski presented the main challenges in human resource management and financial management as identified in the analysis. In this regard, he stated that the legal dimension of recruitment is well-established and the process is generally transparent. However, the public perception is that the selection of candidates for police employment is generally made through political and personal connections, which undermines the legitimacy of open calls. Some sectors of the MoI are not adequately equipped, meaning that they lack either a sufficient number of staff or employees with required skills and knowledge. In addition, he advocated for greater transparency of the MoI's spending and improving the capacities of the internal audit unit in order to establish sound financial control.

The audience included representatives of civil society organisations in Macedonia, academia, the Parliament and the OSCE. After the presentation, they discussed the main challenges in the work of the Police from their perspective, as well as possible models for external oversight given that the current setup does not produce the desired results.