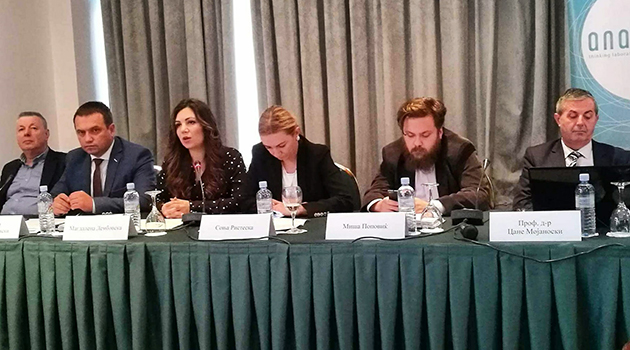 Police integrity through de-politicization and professionalization of the Macedonian Police

Analytica on 5 of December 2017 organized a roundtable on police integrity and risks of corruption in the police. The project team presented the initial findings of this year’s assessment of police integrity. Members of academia and civil society contributed with their own presentations on related issues.

Magdalena Lembovska from Analytica highlighted the weak financial transparency of the Ministry of Interior, which creates further risks of corruption.

“Public procurement in the Ministry proved to be especially problematic. At the same time, the capacities of the internal audit unit are not sufficient to provide proper oversight and control; and to detect possible risks of misuses”, said Lembovska.

Co-author of this year’s report and Vice-Dean at the Faculty of Security in Skopje Dr. Sc. Marjan Gjurovski offered a recommendation for improving the organizational structure dealing with human resource management in the police.

“At the moment, there are three different departments dealing with human resources within the Ministry which only complicates the overall management of human resources. It’s important to establish only one integral organizational structure in order to be more efficient and effective”, recommended Gjurovski.

“We do have an internal control unit within the Ministry; however, past experiences showed indicated questionable independence of this unit. That’s why external oversight is very important, including oversight and control from the Ombudsman, public prosecution, courts and citizens’ attitudes towards police”, underlined Prof. Stojanovski.

Talking about citizens’ attitudes and perceptions, Prof. Dr. Mojanoski discussed the level of trust in the Macedonian police, which proved to below the European average.

“Macedonian police on several occasions proved to be vulnerable to corruption. It is of utmost importance to create a risk assessment of corruption within the police and plan for risk management”, recommended Popovic.

The event was attended by representatives of civil society organizations, academia and state institutions such as the Parliament and Ministry of Interior. All participants agreed that professionalization and de-politicization of the police is the most important step towards ensuring police integrity.