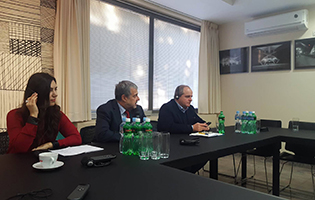 Polish Embassy Skopje, in cooperation with "Analytica think tank" organized a lecture by Dr. Pawel Kowal on the Sources of Polish foreign policy after 1989.

The lecture was held on November 17, 2016, at the Polish Embassy in Skopje.

Dr. Pawel Kowal is a political scientist, historian, publicist, expert on Eastern policy and one of the founders of the Museum of the Warsaw Uprising.

The opening remarks were given by the Ambassador of the Republic of Poland in Macedonia, H.E. Jacek Multanowski. Ms. Magdalena Lembovska, researcher at Analytica, was a moderator at the event.