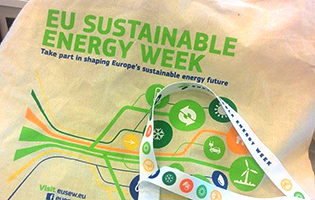 A fair, clean, efficient energy system in SEE and the neighborhood

During EU Sustainable Energy Week in Brussels, SEE SEP (more info on the project here: South East Europe Sustainable Energy Policy), organized the event “A fair, clean, efficient energy system in SEE and the neighborhood”, which was the official launch of the energy model Calculator 2050, which is the main product of the EU funded project. Research and management coordinator from Analytica, Sonja Zuber was representing the Macedonian organizations, partners, in the regional network at this event.

The main idea was to discuss the importance of projecting clean energy pathways for Southeast Europe and to show that this is possible. The models show that by aligning the energy policies with the EU energy roadmap and closing all coal power plants and replacing them with renewable energy sources, the countries of South East Europe (SEE) can have a cleaner and cheaper energy system. The models also show that by implementing EU Energy Road Map goals, the countries would reduce their yearly energy consumption by 60%, instead of increasing it by 6% compared to the business as usual scenario. They would also increase energy efficiency in all sectors as well as prevent rising health costs and reduce dangers to the climate. The findings of the seven new energy models developed for the SEE region, based on open source data and above 500 stakeholder consultations, were launched on the 16th of June, and this event was co-hosted by the European Commission’s Directorate-General for Neighbourhood and Enlargement Negotiations, as a part of EU Sustainable Energy Week.

Moderator was Garret Tankosic-Kelly from SEE Change Net, Sarajevo, Bosnia and Herzegovina who opened the event. Speakers were: Sergan Scrieciu from DG Energy who gave a presentation on: Lessons from EU energy regulated policy experience; Tom Counsell from DECC (Department of energy and climate change) UK whose presentation was about: The UK’s 2050 Calculator experience; Professor Dan Kammen, RAEL, UC Berkeley USA who presented the regional sustainable energy pathways; Ana Rankovic from SEE SEP’s partner Fraktal, Belgrade, Serbia who presented Tier 2 of the Model about Albania and Borko Raicevic from the Energy Community who talked about: Mirroring 2020 targets and perspectives for 2030. Also two MEP’s gave their remarks Mr. Eduard Kukan and Tomino Picula.