SSR in the Western Balkans 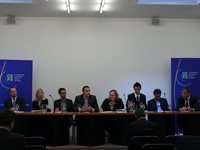 On 26 May 2011, Analytica's Security Research Fellow Andreja Bogdanovski at the Centre for European Policy Studies (CEPS) in Brussels presented part of the findings from the three years long "Mapping and Monitoring Security Sector Reforms" project.


On 26 May 2011, Analytica's Security Research Fellow Andreja Bogdanovski at the Centre for European Policy Studies (CEPS) in Brussels presented part of the findings from the three years long "Mapping and Monitoring Security Sector Reforms" project. Together with the rest of the project's consortium representatives they addressed the questions on: representativeness of women and national minorities within the Security sector, access to information, procurement and critical areas of the control and oversight over Security sector actors. In this regard Mr. Bogdanovski outlined the problem of appointment members of Parliament in the Parliamentary Committee for supervising the work of the security and counterintelligence department and the Intelligence Agency. In other words some of the members of the committee cannot be issued security clearances and the overall procedure might take up to two years and more. This by default creates barrier between what they are allowed to hear and see in the parliamentary committee's work. Hence all classified information are restricted, among which the yearly review and plan of the activities of the Directorate for Security and Counter Intelligence and the Intelligence Agency. When speaking of access to information of public character it was pointed out that the authorities can be very creative in terms of finding a way out of answering the questions that the CSOs send. An example that was used was sending back an envelope which instead of answers to the question consist of repeating the question itself in the answer part. On the question of representativeness Mr. Bogdanovski highlighted the improvements in the overall representation of the national ethnic groups within Macedonia's security actors after the signing of the Ohrid Framework Agreement and especially the Police but also pointed out the issue of lack of representativeness of the ethnic communities within the "more specific" security sector actors such as: security and intelligence services and the Army.
For more information about the project please click here.
Photos from the event are posted on our Flickr page. 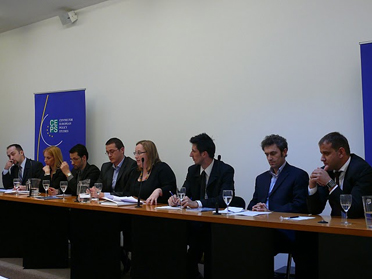 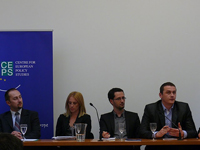